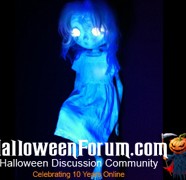 Clockwerk from HalloweenForum has built a really eerie, almost cartoonish looking Ghost Girl and has posted some great pictures and a brief tutorial on how it was constructed.  This creepy little girl sits atop her tombstone with an ominous glow beckoning passers by to enter her cemetery.  There’s nothing I don’t like about this prop.  Heck, I think the tombstone alone looks great, but Clockwerk has really shown some artistic skill with this girl.  It seems like a pretty easy prop to build, but the arms, legs, and head may take some skill to craft (ok, so maybe it’s not that easy). 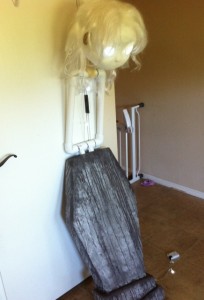 You’ll need to create and mount a PVC frame to the tombstone.  The head is constructed out of a styrofoam craft ball with ping pong balls (with LED’s implanted) for eyeballs, while the legs and arms are created using a combination of paper mache and Crayola model magic. 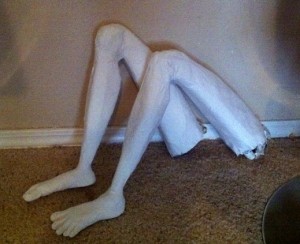