Home » Static Props » How To Build A Treasure Chest 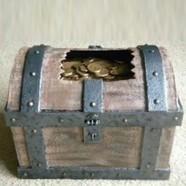 How To Build A Treasure Chest

If you’re planning on going with a pirate themed haunt you’re going to need a treasure chest, and IMU posted a great tutorial on how to make a treasure chest out of a cardboard box at the HalloweenForum.

Start by cutting the side flaps of your box into half rounds and then hot glue the front flaps to the side. You’ll have to cut a thin piece of cardboard to add to the center since the front flaps are now extending further since the sides are rounded. IMU cut out a space on top that the treasure will peek out through.

The metal banding consists of foam core along the top and bottom edges as well as the side and centers.

Once completed the gaps were smoothed out with a little paper towel mâché and then some wood grain was applied using monster mud.

After applying a latch and some hinges crafted from a plastic coat hanger (if you don’t have access to a similar hanger you can buy some small hinges and a latch) it’s ready for paint! 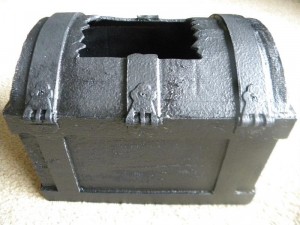 IMU gave it a base coat of black rubber spray paint since it would be sitting outside. Some various wood colors were dry brushed on as well as 2 varieties of metal colored paint for detail. The final touch was adding some rivets throughout the metal bands to give it a really sturdy appearance.

The finished chest looks amazing, IMU did a spectacular job with this and it costs next to nothing to make. 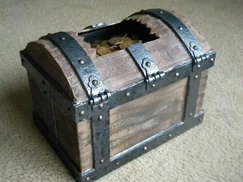