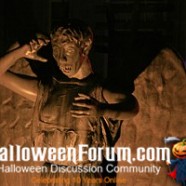 I’ve never really watched Dr. Who, but I’m sure glad that MacabreRob over at HalloweenForum has because the “Blink” episode of the British television series gave him the inspiration to build two life-sized angel statues for his haunt.  To say that the statues are constructed out of paper mache and expanding foam insulation really underscores the amount of work that went into these.

Several coats of paper mache were carefully coated onto a mannequin and then cut and removed in sections.  After they were carefully pieced back together, 1″ wood boards were inserted to add some support and it was filled with expanding foam insulation.

The wings were created using a similar technique with the form created using styrofoam and then coated with paper mache.  MacabreRob went even so far as to cast his daughters face in alginate to provide for the face on Angelica, the passive angel.

Once the bodies were complete he dressed them in robes made from bed sheets and thoroughly coated them in monster mud.  Both angels turned out amazing and it’s really cool to see a family working together on a Halloween project.  It’s definitely an intricate build, but if you can pull it off you’ll have the best looking cemetery in the neighborhood.