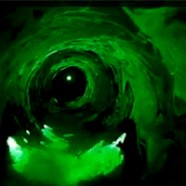 I’ve always wanted to post a link to a tutorial on how to build a laser vortex but I’ve not been able to find one that wasn’t either too detailed to the point of confusion, or lacking in detail, which is equally confusing.  Luckily, UrDaddyO31 posted a short video detailing the design of the laser vortex he used for his prop.  It’s not so much a tutorial, but it does lay out the design he used which was originally created by kimcfadd who has them for sale on HalloweenForum.

This ultra-simplistic design incorporates a mirror mounted on a cpu fan.  The cpu fan and the laser are mounted to blocks of wood and as the cpu fan spins the mirror projects the circular laser effect which will become your laser vortex when you add a little fog.

** Warning: Lasers can cause serious and/or permanent eye damage.  Never look directly at a laser or point it directly in someone’s eyes.  Consult Safety Recommendations for Laser Pointers for more information.