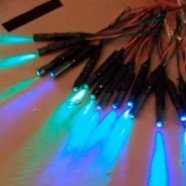 I love mini LED spotlights, and they truly don’t cost that much to buy, but if you’re anything like me (is uber-frugal better than saying cheap?), it’s hard to justify paying for something that’s pretty simple to make.

There are tons of tutorials online to guide you through the process of making your own LED spotlights, but none of the tutorials I’ve read have so clearly articulated the process as the video tutorial posted below.  And with that being said, it should come as no surprise that it was created by Allen Hopps of Stiltbeast Studios.