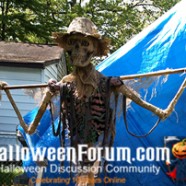 I love scarecrows.  There’s something eerily majestic about the way they stand guard over isolated fields, just swaying in the wind.  They’re selfless as they monitor everything that happens, day and night, silently watching.  Waiting.  I’m pretty sure they eat the birds that make the mistake of landing on them, and its entirely possible that they do get off their perches and walk around while I’m asleep, but, I can’t confirm that.

With all of that said, if you’re interested in building a scarecrow, Nightfisher posted some great details on the build of his Creepy Scarecrow over at the HalloweenForum that are worth looking at.

This project started by hot glueing some burlap over a foam skull and stretching it tight so most of the features of the skull would be visible through the burlap.

After adding some stains and shadows Nightfisher added some large metal staples along the scarecrows mouth.  The skull itself rests on a PVC spine.

The shoulders and arms of the scarecrow were crafted with some heavy branches. 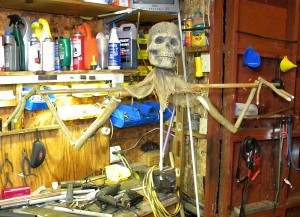 The torso was created by spraying some Great Stuff over a 2 inch block of styrofoam. Nightfisher did an awesome job of spraying the ribs with expanding foam because I’ve got to imagine that was a fairly stressful process.  A few vines were sprayed over the ribs as well to complete the torso.

Once completed some black latex was painted in between the ribs and all of the crevices of the torso.  A base coat of brown was dry brushed on after the black latex dried followed by another layer of black and a final coat of light brown.  The vines were given a coat of green paint.  Finishing touches included adding some stitches to the eyes, wrapping some twine around the joints of the arms and hands, and of course, adding a tattered straw hat. 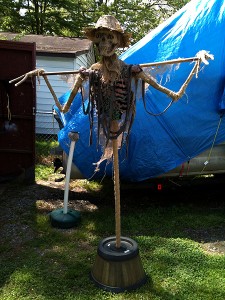 The finished “Skullcrow” looks amazing, and while this isn’t really a typical tutorial,  it should be more than enough to get you inspired to build your own!