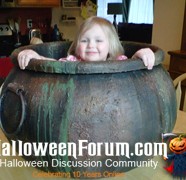 If you’ve ever needed to purchase a cauldron for a haunt you’ve probably been disappointed with your purchasing options.  They’re tiny.  I mean, so tiny that a baby witch would feel uncomfortable using them.  So your best option is to craft your own cauldron.  I’ve seen several really good tutorials on how to build your own cauldron, and Old Man Bakke has a pretty good one posted over at HalloweenForum.  I must admit that when I first saw the cardboard, hot glue gun, and duct tape I was reluctant to continue, but by the time I reached the finished product images on page 7, I was sold.  The size is what I would expect that a couple of old hags would use, and it looks completely realistic. 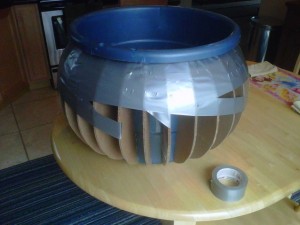 What I like best about this tutorial is that it was a completely fluid tutorial.  If you follow the posts you’ll see that during the creation of this tutorial a user posted a link to some photos from Dave The Dead’s aging technique tutorial that really helped make this into the finished product that it became.  Most of the time tutorials don’t get better on the fly like this one did.

Items needed to complete this prop include: