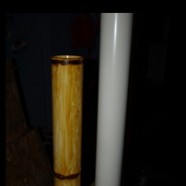 Bamboo, while often being mistaken for wood, is actually an incredibly strong grass. It’s got an ultimate tensile strength of 265 MPa (Megapascals), which is pretty incredible when you consider that cast iron only carries with it an ultimate strength of 200 MPa (spider silk has an incredible 1200 MPa, fyi).  This is no doubt the reason that a single 8 foot bamboo cage could contain 5 stranded castaways so well. 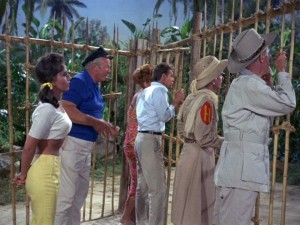 PVC on the other hand only carries an ultimate strength of 52 MPa, but since it is considerably cheaper and easier to get than bamboo you might want to consider using petejc’s tutorial to make some Faux Bamboo if you have the need to build a cage. 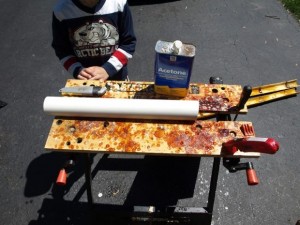 You’ll start by using some acetone to clean all of the writing off of the PVC. Once the PVC has been cleaned you’ll want to cut some notches with a razor blade around the pipe for the bamboo nodes. Petejc recommends going around the pipe a couple of times to get the notch deeper for a better effect. 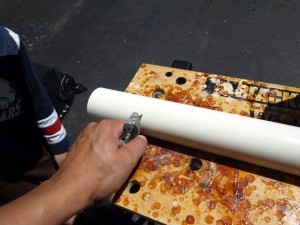 Once the nodes are notched in you’re going to need to grab a blow torch and heat your PVC up a bit. This will not only give it a slight discoloration, but will also allow you to compress the pipe a little bit to give the nodes an actual raised appearance.

Once the nodes are complete it’s time to sand and stain the PVC. Petejc went with an amber shellac instead of stain on his bamboo. Sanding the pipe adds some texture to the pipe allowing the shellac to adhere to. The shellac when applied with a rag gives a great uneven finish that looks amazingly like real bamboo. 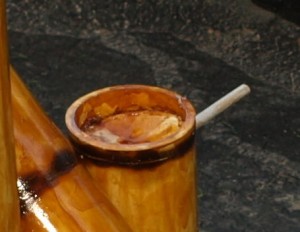