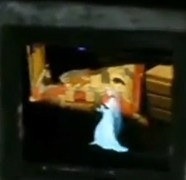 Pepper’s Ghost: Behind the Scenes

There’s nothing better than a good Pepper’s Ghost effect, and there’s few things harder to find than a good Pepper’s Ghost tutorial.  I’ve watched several really shoddy videos describing the effect, but the one that Robert Schuch created provides a pretty straightforward explanation even though it’s designed for use with miniatures.  It’s a really simple effect to create, but doing it on a large scale can prove to be tricky due to the need for the large reflective surface.

For a little additional insight, take a look at the video below of Rolly Crump explaining the Pepper’s Ghost effect courtesy of the Walt Disney Family Museum, it’s definitely worth a watch.