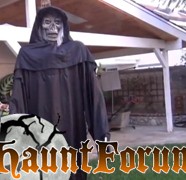 I’ve always wanted my very own stalkaround costume.  I’ve never wanted to pay $1500 for my very own stalkaround costume.  Those two statements have always been synonymous until I found Rottincorps‘ video tutorial over at HauntForum, Stalkaround No Backpack.  I’m not saying that I could make one as nice as Rottincorps’ myself, but I certainly feel empowered enough in the simplicity of this costume that I would be willing to give it a try.   His costume turned out really nice and the motion appears as smooth as silk as he’s walking around in it.