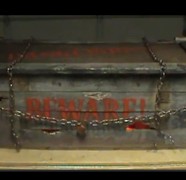 Cyclone Jack’s Monster In A Box

The monster in a box prop has been done a million times, and it seems like each one is done just a little bit differently than the last one.  That’s ok, though, because they all operate using the same principle in which a spinning motor pushes a rod up forcing the top of the box to pop up and down creating the unsettling and startling effect.  Add a couple of eerie lights inside the box and possibly some fog and you’ve got a winner, and that’s exactly what CycloneJackHH did when he made his monster in a box tutorial.