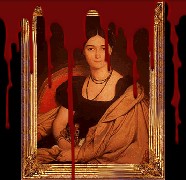 In 1966 Don Knotts posed that question, and fans of the Ghost and Mr. Chicken have been laughing at his classic portrayal of Luther Heggs, intrepid reporter ever since.  If you’re at all familiar with the film you’ll recall the classic scene where Luther comes across the portrait of old Mrs. Simmons that he had just seen intact five minutes earlier has been pierced with a pruning shears and is dripping blood, the exact way she was murdered 20 years prior.  Luther’s conniption fit upon seeing this is pure comedic gold, and he drops like a leaf, out cold.  I’ve always wanted a house like the old Simmons Mansion, and with Chris’ tutorial of the Bleeding Portrait, I’ll be one step closer.

It looks to be a little bit of a tricky build, but would definitely be a crowd pleaser in any haunt.

Items used to create this include: