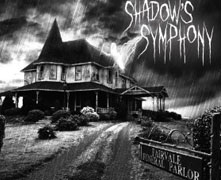 Last week I was reminded of an album that I overlooked last year, Fairvale Funeral Parlor by Shadow’s Symphony, and the timing of this could not have been any better.  It’s now going on seven days straight with overcast skies and rain where I live, and there’s seven more in the forecast.  I cannot think of a better soundtrack to accompany this miserable stretch than Fairvale Funeral Parlor.  With 21 tracks of ominous and creepy melodies that tell the tale of a deserted funeral parlor, this album is everything you could ever want if you find beauty in the darker side of things.  This eerie offering could easily be incorporated into any home haunt.

It’s available via digital download from Amazon and the iTunes store as well as direct from the Shadow’s Symphony Facebook store.  Whether you plan on using this in your haunt, or just listening to it while you sit on the couch watching the rain come down, this album is the perfect soundtrack for any haunter’s life.