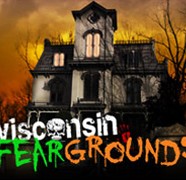 The Wisconsin Fear Grounds is trying to bring your nightmares to life in 2013!  Back for their 10th year of fear this awesome haunt features 3 unique haunted attractions.

Located in Waukesha Wisconsin this haunt has been selected by Haunted Attraction magazine, America’s Best Haunts and Haunted House ratings.com as one of the best haunted houses in the country.