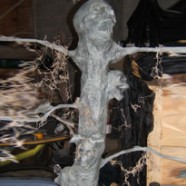 The Haunted Yard in Ontario, Canada is host to Draven Cemetery, which is apparently so terrifying that it is actually scaring the trees!  Well, at least one that we know of.  The Petrified Tree is the brainchild of Trevor Baldwin, owner and caretaker of Draven Cemetery, and it’s a great looking prop that’s fairly simple to complete.

The prop is composed of a post with a pool noodle wrapped around it to add some bulk to it. Some wire from coat hangers is used to make the branches of the tree.  Once you have the general shape of a tree the skulls can be added to the tree.

In the tutorial, three mini plastic skulls and one full sized plastic skull were used, but that can obviously be determined by the size of your tree.  Trevor actually cut the jaws off the skulls before attaching them to the tree so that once attached the jaws could be added in more of a screaming position.

With the skulls in place a few plastic leaves were added to the branches before a coat of paper mache was added to the entire tree.  Once the paper mache was completed a coat of mossy green paint was dry brushed on followed by a coat of black paint to highlight the texture and shadows.  The final step for this project was to add some fake moss around the tree.  It’s a pretty simple project but it looks fantastic and is sure to be a head turner. 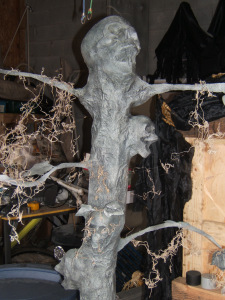