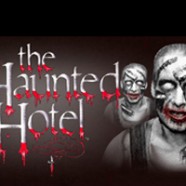 Since 1993 the spirits at the Broker’s Building on Market Street have been spilling out onto the streets beckoning passersby to check-in to The Haunted Hotel, where horror movies come to life!

Located in the heart of San Diego’s Gaslamp District, The Haunted Hotel is the longest running haunted house in San Diego.  The building alone has been around for around 125 years and with that much history inside it there’s bound to be some restless souls left behind.

It was named by Haunt World Magazine as one of the top 13 haunted houses in America and was prominently featured in “America Haunts IV” on The Travel Channel.  This year, try to survive the “Walking Dead” dungeon, come face to face with the killer clowns on the subway car, and get a real life experience of the “Evil Dead” cellar.

The Haunted Hotel is a visual delight, filled with awesome props and effects, but the real gem behind this haunted attraction are the actors, who go over and above to provide guests with a memorable haunted experience.


Tickets available at the door