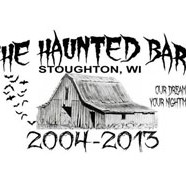 Since 2004 the Haunted Barn has been sending thrills and chills down the collective spines of Wisconsin residents, but as with all good things the terror must end, and this will be the final season for this great haunt.  If you weren’t lucky enough to have attended the Monsters in May event that they hosted earlier this year then you’ll really want to make it a point to attend the Haunted Barn this October.

the Haunted Barn was born out of the remnants of a tiny petting farm and over the years has evolved into one of central Wisconsin’s premier haunted attractions.  This year’s haunt features the all new  “Field of Screams” and it’s the largest single area they’ve ever put together, even bigger than the Haunted Barn itself!