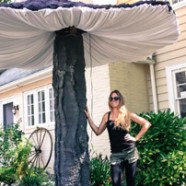 The Build of Giant Mushrooms

Ever hear the phrase “Go big or go home”?  Well I’m pretty sure Rania Peet has, and her larger than life Halloween props sure live up to that standard.  This time she’s set her sites on The Build of Giant Mushrooms, and her finished fungi could not have turned out any better!

Her mushroom build is broken down into three core parts: the stem, the cap and the underside gills.  Realistically, I could get the stem and the cap done, but I’d probably fail miserably on the gills.

The top and bottom of the stem was made from 3/4″ plywood. She used (3) 2x4s in the center to create an approximately 18″ diameter stem. 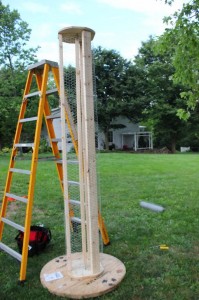 The 2×4’s are secured to the base using lag screws and washers for extreme strength and stability.  For her build, Rania was lucky enough to have access to a wood cable spool which provided the perfect oversized round base.  The stem was then wrapped with chicken wire.

The build of the mushroom cap is pretty ingenious, it consists of a 1′ piece of 4×4 that is securely screwed to a sheet of plywood with lag screws.  She then proceeded to bore four holes through the four by four and ran some rigid electrical conduit through it. 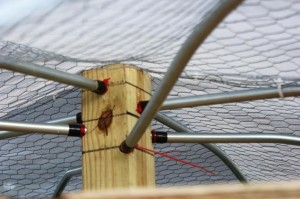 Once in place the conduit was bent to provide the cap with a more “mushroom” shaped appearance. Some 3/4″ poly-flex tubing was screwed to the end of the rigid conduit to give the cap a finished, rounded edge.  A layer of chicken wire was then added to the cap which was covered with a dense cheesecloth to hold the layers of spray foam.

Think Rania bought a couple of cans of Great Stuff?  Guess again, because this is where she takes this project up a notch.  She employed a closed cell Versi-Foam spray foam system to completely cover her mushrooms.  The kits cost her almost $800, but it’s probably the only logical way to get this done due to the scale of these shrooms. 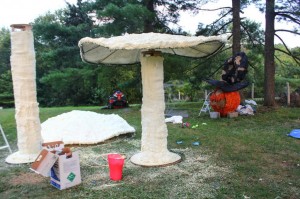 Once the foam was fully cured two coats of paint were applied to both the stem and the cap and the painstaking process of creating the gills could begin. And, I could not be any more serious here, the gills make the rest of the project seem like a walk in the park. 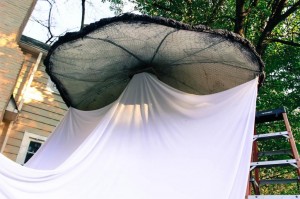 She employed 120″ wide spandex which was cut and stretched from center to outside edge repeatedly.  The spandex was stapled in sections and then hot glued to the outside edge of the cap.  The time and effort it took to create the pleats for the gills on these mushrooms really paid off because it adds an incredible level of detail.

Let’s face it, it would have been really easy to walk away after the underside was spray foamed and call it a day, but they simply wouldn’t have looked as good as this.  And if you want to see what these bad boys look like all lit up, be sure to check out her incredible site Don’t Forget To Stop And Eat The Roses. 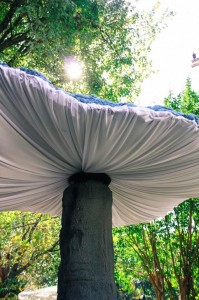 Rania even documented The Build of Giant Mushrooms with this awesome video!

Items needed to complete this include (but are certainly not limited to):