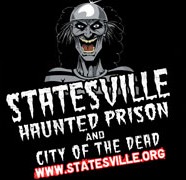 The prisoners have seized control at Statesville Haunted Prison®, located just outside of Chicago, and the Demon of Darkness has opened the gates for visitation.  Think you’ve got what it takes to survive the horror the inmates of this maximum security prison have in store for you?  As you make your way through 23 maximum security cells you’ll come face to face with unspeakable malevolence as you encounter over 100 of the criminal inmates that were too evil to die.  If you can make it out of Statesville Haunted Prison®, you’ll be rewarded with a trip to the City of the Dead, where you’ll come face to face with the Gatekeeper of this unholy tomb.  You’ll have to make your way through legions of the undead as you try to avoid joining their ranks and becoming a permanent resident.

This haunt is actually two haunts in one, lasting an average of 40 to 50 minutes from start to finish, and is intended for teen and adult audiences only.  Statesville Haunted Prison® has been named “Best Haunted House in Chicagoland” for 10 of the past 12 years by HauntedHouseChicago.com and ranked a “Must See Top 25 Haunted Attractions in America” by Haunted Attraction Magazine.

NO ONE 10 AND UNDER WILL BE ALLOWED ON THE PROPERTY AND PERSONS 15 AND UNDER MUST BE ACCOMPANIED BY A LEGAL GUARDIAN.