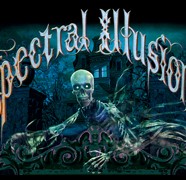 Spectral Illusions are the creators of some spectacular visual effects for the haunt industry and they’ve just expanded their already impressive library with four new effects for the 2014 season.  Each of these new visual effects ring up at $20 and are instantly downloadable in both high definition (1920×1080) and standard definition  (720×480) formats as QuickTime movies.