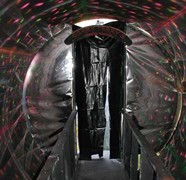 If you’re feeling extra industrious this year, and the notion that your efforts could result in an epic failure don’t frighten you, you might want to attempt to build a vortex tunnel for your haunt.  Scary Terry has laid out a tutorial on how he built his, and while it doesn’t contain a complete supplies list, it should be more than enough to get you started.

The tunnel has a frame that consists of three 10′ diameter “hoops” that are attached to each other, and it’s the precision required to get the plywood cut accurately that will ultimately determine your success with this project.  The hoops are spun around by three pairs of bicycle wheels, five of which are free spinning with the sixth being driven by a motor.  It’s the sixth wheel that actually rotates the tunnel itself.  You’ll need to build a bridge for people to walk on, and the hoops will actually fit around the bridge, rotating around it.  Once the frame is complete it’s just a matter of attaching fabric around the inside of the hoops and painting a sufficiently nauseating pattern on it.

Building a vortex tunnel is a pretty serious undertaking that requires skill and accuracy.  I’ve always said that confidence is a great asset, but knowing when you’re in over your head is a better one.  I know that I would be in over my head with this build, but if you’ve got the skill to get it done, it will be a crowd pleaser.  Good luck storing it, though!