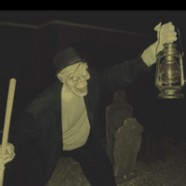 I’ve wanted to build every prop I’ve come across lately, but none as much as I want to build this one.  The Gravedigger that Mizerella at 102 Wicked Things To Do created for her cemetery is amazing looking and doesn’t seem that difficult to pull off (said the guy that’s never created an entire person out of paper mache).

The head of this fellow will take the most care and attention to detail when creating.  It’s made using a foam skull that’s a blend of paper mache, mache pulp, and Creative paper clay.  The features of his face including the nose, ears, tongue, teeth and eye brows will need to be built up with the Creative paper clay which is where some basic sculpting abilities will come in handy.

Once you’ve got the head done you’re almost done.  The rest of the prop is a pvc frame that’s been heated and bent to give him a warped stance.  The pvc frame is then covered in chicken wire and paper mached numerous times.  The arms and legs incorporated pool noodles to build them up before coating them in paper mache.  The final piece of the puzzle when creating this fellow were the hands, which were a mixture of wire, cut straws and many layers of paper mache and mache pulp.

Once all of the pieces of the puzzle are complete it’s just a matter of dressing this guy up in your favorite old clothes and finding a final resting spot for him.  Mizerella’s gravedigger looks incredible and I’m a little skeptical on whether I can make one that looks as nice, but I will definitely be giving this guy a shot.