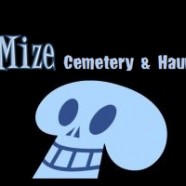 The Mize Cemetery and Haunt is a great example of how to turn something you love into something that truly benefits your community.  This charity home haunt located in Salem, Oregon has been delighting local residents since 2006, and more importantly, providing food donations to the Marion-Polk Food Share since 2009.

The Mize Cemetery and Haunt began as a small yard display and has grown in size and scope over the years into a must see home haunt.  The majority of the props in this haunt were created and built by hand, and their creator, Terry Marsh does some really excellent work.  In fact, in 2011 Terry was invited  to present a workshop at the West Coast Haunters Convention, as well as  showcase  some of his props to fellow haunters.

Admission to this charity haunt is free with your donation of a non-perishable food item.  The Marion-Polk Food Share distributes over 8.2 million pounds of food annually through partnership with nearly 100 member direct-service charities that are working to serve hungry families, children and individuals in Marion and Polk counties.