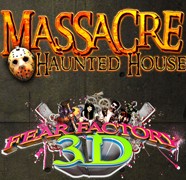 Odyssey Fun World in Naperville, Illinois is home to paint ball, bumper cars, and some sort of gopher named Chipper.  And then October rolls around and there’s a good dose of terror added to the mix as The Massacre Haunted House opens it’s doors.

This haunted attraction offers 15,000 square feet of thrills as you make your way through over 35 rooms featuring more than 40 actors trying to “fear” you to your knees.  Fear Factory 3-D is a creeped out three dimensional adventure filled with intense colors and effects.