Still a relatively new kid on the block, Hauntville Haunted Houses’ reputation continues to impress, as well it should, after all, its creators have been in the professional haunt business for over twenty-two years.  This haunted attraction in Elyria, Ohio offers three unique haunted attractions, plus the all new 3-D Zombie Hunting Area.  The haunts are setup in a free flowing sort of way so it actually seems like one giant attraction instead of three unique haunts. 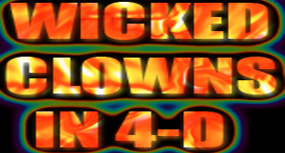 Visitors to Hauntville Haunted Houses will have the opportunity to experience Ohio’s first 4-d Haunted House.  Wicked Clowns in 4-D, promises a mind-blowing environment, full of emotions.  The use of 3D glasses combined with physical and special effects that are synchronized together creates an intense, thrilling and exciting visual and sensory experience.  And don’t forget, there’s Wicked Clowns to deal with as well!

Psycho Manor will take you on a tour through a 1920’s Victorian Mansion that’s loaded with creepy detail and awesome effects.  The lost souls that make this their permanent residence are more than willing to interact with visitors and make them feel at home.

Cell Block 13 is an extreme tour of a prison and psychiatric hospital built to house some of the most dangerous and criminally insane prisoners.  You’ll get to meet the warden, and tour the cell blocks, sanitarium, infirmary and execution chambers.  You’d better hope a riot doesn’t break out during the tour.

All new for 2013, is the specially designed Zombie Hunt in 3-D. Shooting Zombies is always fun, but shooting them in a ChromaDepth 3-D environment is Zombie killing to the extreme!