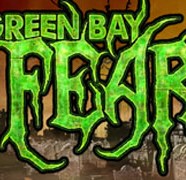 This haunt in scenic Green Bay, Wisconsin takes place in the former mansion of 1800’s Lumber Tycoon Jaden West.  When his mutilated corpse was found it was a reminder to all of the importance of good labor relations, as well as a chilling portent of the evil that was to be unleashed.  In 2000 this stately manor was relocated in an effort to restore the northern shore wetlands, was spared demolition, and is now open to those brave enough to enter its accursed halls.  Welcome to Green Bay Fear.