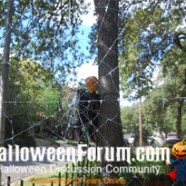 If you’ve taken the time to build a giant spider for your yard you’re probably going to want to follow it up by building a web for it.  There are many ways to accomplish this including cheesecloth, yarn, and even rope.  None of these methods, however, look as realistic as the Giant Orb Spiderweb that dariusobells from the HalloweenForum posted.

His method involves driving nails into the trees that mirror each other and then wrapping and hot gluing fishing line to the nails in a diagonal pattern. 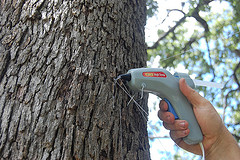 Every time the fishing line intersects in the center it gets wrapped and hot glued as well.  He details the pattern that he follows when driving the nails into the trees as well as the path he follows securing the fishing line to the nails as well.  I had to read it several times until it clicked in my head, and I don’t think I would be doing dariusobells justice by relaying the pattern he utilizes because his tutorial details it precisely (and probably more accurately than I would). 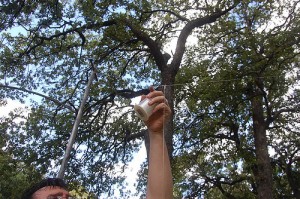 This is a tricky project and is a fairly lengthy process, but if you can get the pattern down and have a little patience the results are spectacular.  Add some UV reacting fishing line and a black light and you’ll definitely turn some heads. 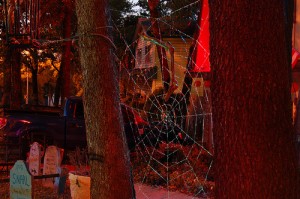