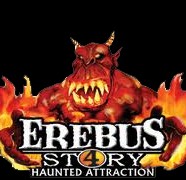 Depending on who you ask, Erebus is either the son of Chaos and the brother of Nye (Night) in Greek mythology, or the darkness beneath the Earth that the dead must pass to reach Hades.  If you ask the people of Pontiac Michigan about Erebus, though, you’ll get the real answer: four stories of fear.  This massive haunted attraction is the former Guinness Book of World Records holder for the world’s largest walk through haunted house.

Inside Erebus you’ll get to see the world’s first fully functioning time machine, which was constructed by Dr. J. Colbert.  The time machine is largely considered a failure since, though it did transport test subjects through time, the time period they arrived in reacted to them as a virus and attacked.  And now it’s your turn to test the limits of the space time continuum as you work your way through time in what is an incredible feast for the eyes.  This is a high intensity haunt, and you will be dazzled by incredible effects and props, all of which are created in house.  You’ll encounter a tilting vortex tunnel, huge tarantula’s, werewolves that attack and even an enormous dinosaur head busting out of the wall.  No matter what definition you choose, Erebus is truly a one of a kind interactive experience that you do not want to miss.