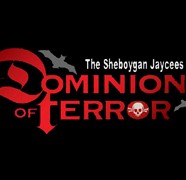 For almost four decades the Sheboygan Jaycees have been terrorizing Eastern Wisconsin residents with the Dominion of Terror Haunt, and they’re back at for their 2013 campaign.  This haunt features over twenty completely redesigned rooms (so that none are repeated from 2012), and promises to “terrorize your very existence and chill you to the bone”.

On October 26th there’s a special lights on trick-or-treat matinee of this haunt with no monsters present for the little ones.  Instead, the Sheboygan Jaycees will hand out candy in each room. Afterwards, guests attending the Munch with Monster event can participate in fun crafts, games, eat treats, and pose for pictures with Frankenberry!

And just in case you’ve ever wondered what it would feel like to be buried alive, the Dominion of Terror’s Last Ride will give you this chilling experience for only $3.00 a ride.

The Dominion of Terror is a non-profit haunt that donates all proceeds to local charities.